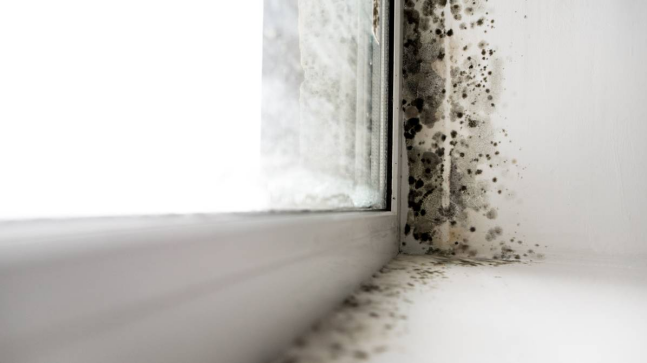 A breeding ground for mould is attributed to the ongoing excess wet weather in Sydney, sequestered with humidity and high temperatures. In this blog, we discuss how to identify and eliminate the mould engendered by flood or heavy rainfall in your home. A flood can be one of the most damaging and devastating things to happen to a home. In addition to the immediate hazards caused by water flooding, the aftermath of the water that lingers will inadvertently lead to massive mould problems affecting homes, businesses, and industries.
Mould is detrimental not to the property alone but will also impair the health of the inhabitants at the property. Mould can instigate asthma-like symptoms including coughing, wheezing and shortness of breath. Some common but lesser-known symptoms of mould exposure may also include sleep deprivation, muscle aches, and lethargy.

Mould is part of a family of organisms called fungi that also include mushrooms and yeast. It is ubiquitous and seen both indoors and outdoors. Mould is classified into different types, each of which have the potential to trigger and initiate health problems and structural issues within a building.

It is pivotal to remove all items affected by the flood as soon as possible. Plasterboard and flooring will need to be completely stripped out or demolished if heavily affected by flood. Likewise, wet furnishings and possessions that are unsalvageable must be discarded. This is inevitable as these can harbour mould and bacteria that can be imperious to health.

Common areas for mould susceptibility include ceiling spaces, wall cavities, basements, cupboards, and bathrooms. Mould spores occur frequently in nature and can easily be transported into the home or workplace by airflow through doors and windows, as well as being carried in on objects or people. Weather events such as storms where structural damage to the building or flooding has occurred will presumably result in mould growth formation within the building or structure. The presence of spores on a damp space can accelerate the speed of their growth If spores.

Identifying the source of mould can seldom be a tricky situation. The mould will often manifest as a stain, smudge, or merely a discolouration of the surface it is on. Mould colonies may also have a fuzzy or hairy appearance. Mould colouration can vary depending on the species of mould that is present. Commonly mould will appear as black, white, or green. However, certain species of mould may be seen in a range of colours including brown, orange, or grey.

If a possible mould contamination has stolen your peace, and if this concerns the safety of your home or property, our building consultant Elie Farah can conduct a detailed mould inspection for your property. Our mould inspection will determine the health risks associated with the microbiological infection that could be possibly contaminating your home or building. Our inspections assess multiple factors by collecting moisture readings and thermal camera throughout the structure. The evidence gathered during the inspection will help us ascertain the nature and growth density of the mould present within the area or areas including those that are not immediately visible or accessible. From these criteria and gathered evidence, we will then provide a professional report inclusive of recommendations and conclusions for potential remediation works that will be appropriate and determined on a site-by-site basis.

We at Effective Building & Consultancy can provide you with a complete mould inspection report in as little as 24 hours! To book an inspection or to find out more, contact us today on (02) 9613 3353.